Tuna Valley Cutlery Company is an exclusive line of traditional knives geared towards the contemporary collector. They are only made in limited edition runs, and they are known for their superior specialty steels, and the most beautiful, natural handle materials. 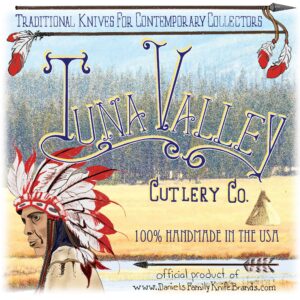 Here is some brief history regarding this name. The first known use of Tuna Valley name on pocketknives was in Bradford, PA in the early 1900's. During the Platts & Case merger, this stamp was used on a few knife orders imported from Europe, to help boost their inventory while the new factory was being set up.

Fast forward to 2007, and the stamp was revised by Perry Miller for a couple prototype knives, for his Spaceport Cutlery brand. In 2009, Miller made his first production run of Tuna Valley knives, which sold out fast. In 2010, he had another set of knives made, with his vision to bring out only a select number of releases, in low quantities, with the highest grade steel and handles available for a production knife.

By 2012, the Daniels family had acquired the rights to produce knives under this name. However, they kept to Miller's original view of high quality and low quantity, for high end collectors. Additionally, once a knife has been made, that exact pattern/handle combination will never be made again. Collectors ate these up with every release, and many of the patterns are all but impossible to find in the secondary market.

The new Tuna Valley releases are owned by Ryan and Courtney Daniels.

Below you can view photos of all previous and current production releases by year.

*Note that seconds (marked "EDC"), prototypes, samples, and some short runs are not shown on this page.

The Tuna Valley Cutlery Co. line of knives are offered exclusively by Daniels Family Knife Brands, and sold only by these dealers.