Frederick Stacy was born in a small town outside of Sheffield, England. As a young man, his family had him enter into an apprentice program with a well-known cutlery manufacturer. His first job had him shuffling parts from one manufacturing station to another for assembly. These youngsters essentially kept the operation moving. They could be seen running up and down the stairways from the stash of ivory and stag in the darkened bottom floors to the production areas filled with natural light to assist the grinders in their daily task of creating blades. Once the kids proved their dedication to the craft, they were allowed to tutor under some of the greats of the time. This is how young Frederick worked with some master cutlers. His first job was with Mappin and Webb of Sheffield, England. Frederick Thorpe Mappin had exceptional skills and defined political views. Mappin worked for his father’s company from the age of thirteen, running it alone after his father’s death in 1841. In 1851, he became the youngest ever Master Cutler, but after a dispute with his younger brother, he left the firm. He often traveled to America to secure business deals with the cutlery companies of New England.

Sheffield is synonymous with cutlery production and reigned as the giant in the industry. The availability of raw materials in close proximity, like iron ore, coal, charcoal, and stone for grinding wheels, guaranteed the city’s place in history as the knifemaking capital of the world. Other advantages, like several fast-flowing rivers and nearby forests for wood and charcoal to help power machinery allowed this city to flourish with this type of industry. But, of course, the continuous soot that lay heavy over the city and poor working conditions did not endear it to many of the younger cutlers, who sought better wages and working conditions in the flourishing knife works of America. Several years later, unmarried and unhappy with his future, Frederick received an invitation from a razor manufacturer to come to America and earn a better wage with the promise of a prosperous future in the land beyond the big pond.

The trip across the ocean was a grand adventure for the young lad. As the boat docked in the City of Boston, he was immediately met with an angry crowd protesting the unfairness of cheap imports from the United Kingdom. He pondered that this protesting wasn’t permitted in England, and those who opposed the government often ended up in poverty or worse. However, he thought it was better to keep his mouth shut rather than stir the pot. Finally, a man stepped up and asked if he was looking for work in the cutlery business. He replied in the positive and started to mention a letter from a razor manufacturer, but his contact just grabbed him by the cuff of his shirt and led him to a wagon with other immigrants. He soon learned that this wasn’t who he was supposed to connect with, but the driver bragged to the wagonload that they would be much happier with his company. This was a common trick to keep a steady labor supply for the factories. These shysters were famous for plucking the “fresh fish” of unknowing young men and dropping them off at businesses in need of skilled laborers.

Skilled cutlers, particularly those that could grind razors, were in high demand in the U.S. and pretty much could pick and choose where they worked. Razors were much harder to create correctly and could bring about a better hourly wage. Fortunately, Mappin had taught him the tricks of the trade. Over the years, Frederick traveled all over New England, working for various manufacturers, and made a decent living at it for a while. At one of these shops, he met his wife, Bessie. She was the daughter of a German cutler, and at this time, the English and German workers didn’t always see eye to eye. In fact, they were often kept separated to avoid a clash between them. Their differences often worked out on the baseball field during lunch breaks. Bessie’s father held strong political views, and it wasn’t until Frederick adopted the same stance that he endeared himself to the family. It took a lot of time and humble behavior for Bessie’s father to finally allow the two to spend time together. Bessie became the love of his life, and it wasn’t too long after the simple wedding that they welcomed baby Douglas into the world.

The unrest that led up to the civil war and the aftermath was a major political problem back then. The assassination of then-President Lincoln and then the poor performance of his successors only added to his discontent with the system. A family trip to New York City became an eye-opener for the young entrepreneur, Douglas. The morning paper that day recanted a story about Margaret Brown. Her nickname was Old Mother Hubbard, after the nursery rhyme of that same name, which was popular at the time. A kindly-looking older woman, she hoodwinked many into thinking she was innocent. The police seemingly turned a blind eye to many of her antics due to the corruption of the gang she was affiliated with and the hush payments they made to the city officials at the time. The entire city knew about this female bandit who was part of the Marm Mandelbaum’s “inner circle” of Irish-born female criminal immigrants. She was well-known for her shoplifting and pick-pocketing proficiencies. As a housekeeper, she could scout out the best places to apply her dishonest skills that spanned over fifty years. However, she was arrested a few times and ended her career at Boston’s Deer Island house of corrections. Douglas’s father held his hand as they walked through NYC’s famed Hell’s Kitchen; the young lad recited the nursery rhyme quietly to himself.

She went to the Baker’s
To buy him some Bread;
When she came back
The Dog was dead!

She went to the Undertaker’s
To buy him a coffin;
When she came back
The Dog was laughing.

As the wheels of fate turned, Douglas left his parents in New England and ended up settling down of sorts in Ohio. He was very proud of his state and extremely pleased with the newly elected President of the United States, James Garfield, who was born in a log cabin in Orange, Ohio, and grew up working on a farm to care for his widowed mother. But, unfortunately, his grit and persistence found him knee-deep in the political quagmire of Washington. As President, Garfield was immediately met with many challenges. Nevertheless, he served as the 20th President in 1881 after nine terms in the U.S. House of Representatives.

A political cartoon published by The WASP newspaper emphatically summed up the situation quite well. As Douglas looked over the lampoon of Garfield’s early presidency and those government officials that emptied the political cupboards owned by the taxpayers of this great nation, he learned to question seditious government actions at a very young age due to his father’s earlier experiences and strong-willed mentors. 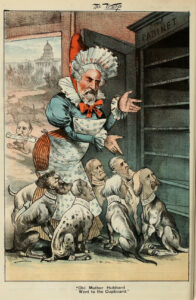 This hit home with Douglas as he recalled the story of Old Mother Hubbard in NYC stealing so much from the cupboards of her victims. Then, to further the pain and his displeasure with the current political scene, his hero, the Ohio-born President, was assassinated after only serving for six months.

As the President stood at the railway station at Washington’s Baltimore and Potomac, Charles J. Guiteau shot him in the back. Using rudimentary implements, the physicians manipulated their unsterilized tools and bare hands to attempt to remove the bullet. Mortally wounded, Garfield lay in the White House for weeks. Alexander Graham Bell, the inventor of the telephone, tried unsuccessfully to find the bullet with an induction-balance electrical device he had designed. Douglas had one of these at the Bronze Lantern due to his fascination with medical quackery. The President stayed in Washington for a short time and later requested transport to the New Jersey seaside in order to further his recuperation. Unfortunately, he passed away from infection and internal hemorrhage on September 19, 1881. Guiteau was an embittered attorney who wanted to be appointed to a consular post, seeking revenge on the newly elected President. Uniquely enough, his vengeance was misguided, as Garfield had nothing to do with his situation.

Years later, Douglas contemplated that early event. He now possessed strong political opinions and wanted to subtly promote his discontent with the government, just as his father had. Nevertheless, his cutlery sales from the Bronze Lantern continued to remain quite lucrative. Nearly everyone carried a knife, as they were part of your daily life. Cutting a string on a package, opening letters, peeling an apple, whittling a stick, and hundreds of other uses necessitated owning one for yourself.

As a form of advertising, many manufacturers would etch their product line via a process using acid or stamping. This allowed them to apply a multitude of possibilities for publicizing one’s products or beliefs on a common tool amongst the masses. This gave Douglas an idea. How about a knife with the statement “Old Mother Hubbard” on the blade? Those that were familiar with the age-old nursery rhyme would easily equate it to political discontent. Never one to be subtle with his approach to life, Douglas chooses to go bold with this idea and have the quote placed on a sunfish pattern knife. This gave him the opportunity to have it displayed prominently for everyone to see long after the knife left the production floor. An activist in a very discreet but powerful way that even the legendary militant Frederick Mappin would have embraced.

The WASP newspaper became extremely popular in the late nineteenth century, notwithstanding its somewhat narrowminded readers. The outlay to produce such a periodically at this time was almost astronomical given the deepening economic depression the United States was facing. Yet, amazingly within the first few months of distribution, the circulation grew to more than 7,000 regular readers who anxiously shared the paper with others of a like mind and quickly shut down its lesser competitors.

The dubious success of The WASP stemmed from its biting social criticism, its flippant arrogance towards people of power, and its staff’s keen sense of popular discontent with the economic downturn, unemployment, and “problem groups.” This does not discount; however, the quality of the publication. The WASP gave its readers high-quality political cartoon art supplemented with sophisticated satire that captured the way Frederick Douglas was feeling at the time. That sunfish knife would do the same thing and undoubtedly would have made Douglas’s father proud. The cupboards in America should never be bare due to the government’s ill-gotten actions. This still stands today, and you’ll be reminded every time that blade snaps into place, and you read that statement. “Old Mother Hubbard.”